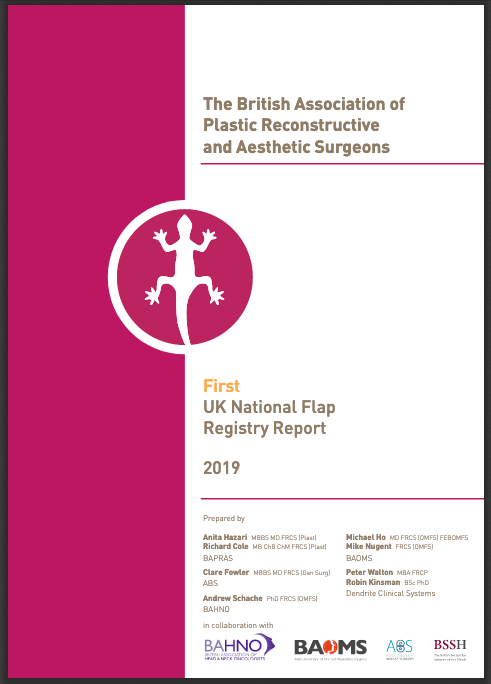 “The motivation for individuals across the collaborating specialties has come with a shared belief in the need to verify and improve clinical standards and a desire to breakdown historic specialty barriers. Thank you to surgical colleagues from BAPRAS, BAOMS, BAHNO and ABS who have helped with this report, interpreting the graphs, tables and charts in a manner that is clinically relevant and avoids inherent problems of over interpretation of data,” Miss Anita Hazari, Consultant Plastic Surgeon, UKNFR Audit Lead, writes in the Introduction of the report on behalf of the UKNFR Team. “The UKNFR is the first national registry of its type in the world to collect data on all major pedicled and free flap operations. Data entry is voluntary, and it is acknowledged that unit data in this first report may not be a true representation of the case load of each participating unit. However, this report is the first step in a process that will span years.”

The report includes 5,751 operation records from over 180 registered consultants from 97 private and NHS hospitals in England, Wales, Northern Ireland and Republic of Ireland (surgeons in Scotland are awaiting permission to join this project from the Public Benefit and Privacy Panel (PBPP) for Health and Social Care).

Key findings of the report include:

The UKNFR not only assesses the quality of care patients receive but is used by specialists as part of a professional practice process for appraisal and revalidation.

“The UK National Flap Registry offers all surgeons undertaking flap reconstruction the opportunity to engage in reflective practice and to contribute to ever improving outcomes simply by contributing to the project and entering data appropriately. The greater the engagement the more robust the data will become and the more our patients will benefit,” Mr Mark Henley, BAPRAS President, writes in the Forward in the report. “The findings are encouraging in reflecting best practice and satisfactory outcomes, but the data also indicates areas of practice such as in the consideration of co-morbidities where continued collaborative working has the potential to significantly improve outcomes. I commend this report to you as the first stage in a new era of reconstructive surgical practice and look forward to future developments.”

It is hoped the next iteration of the registry will include defined categories of partial flap survival, and therefore a clearer reporting of the process of flap reconstruction rather than its current binary representation. This specifically relates to head and neck flap surgery, and lower limb reconstructions. In addition, the registry will also include information on whether or not Enhanced Recovery After Surgery (ERAS) was applied to flap reconstruction patients.

“We are proud to be part of publishing the world’s first national registry report on pedicled and free flap operations,” commented Dr Peter Walton, Managing Director of Dendrite Clinical Systems. “I would like to thank all the surgeons who have contributed their data, which has resulted in this ground-breaking report. We look forward to publishing further reports to help healthcare professionals assess and improve the quality of care they provide for patients.”